Finally it is time to show the world the fruits of the many hours of volunteer labour that has gone into the railway.

Book through the CHR website to travel this weekend on one of the many trains running between Oswestry and Weston.

Here Dave has captured the locomotive at Weston. 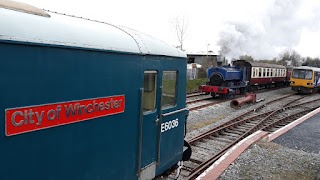 We look forward to seeing you soon.

And now that the railway is open I think that the blog has run it's course. Many thanks for joining us on the journey to Weston. 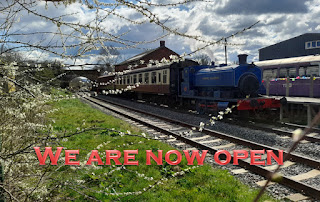 Come along and take a ride on our new railway.  We hope to see you soon.

A new blog will be along when it is time to renew another part of the railway.

The CHR website now has details of the first trains and places can be booked. We look forward to welcoming you.

Meanwhile work is ongoing along the line in preparation for public services.

The running line at Oswestry has seen some spot re-sleepering. Andy G sent some pictures.

We start with the RVV moving the replacement sleepers into position. 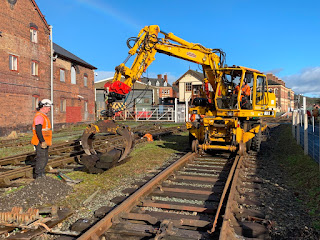 It's time to take out the sleepers no longer suitable for the running line. 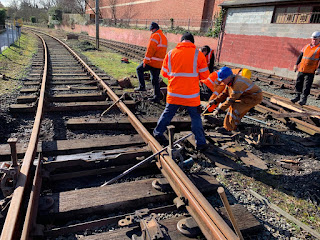 Keep checking to make sure that all is aligned. 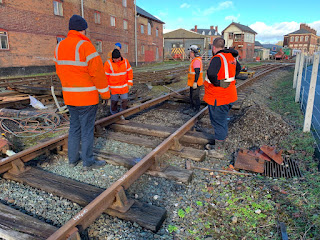 With lots of wiggling and jiggling the new sleepers are placed in position under the rails. 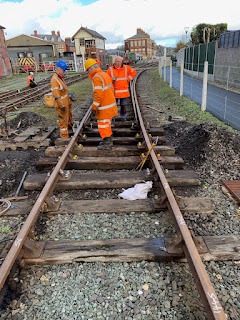 The all important check to ensure that everything is to gauge. 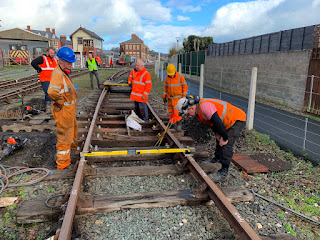 Time to fill with ballast. 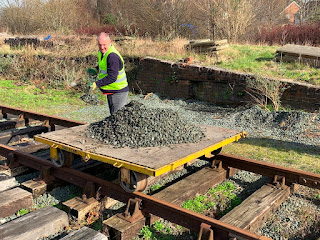 Then it's packing time to fill the gaps around the sleepers and to ensure support. 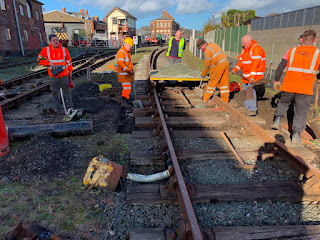 Time to assess the job and fill in any gaps. 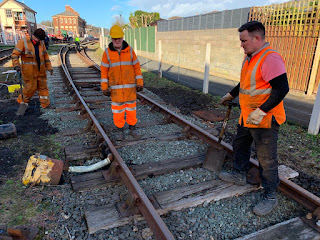 Job done and time to pack up and drink tea. 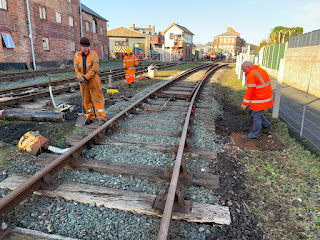 In parallel other work is in hand with lineside furniture and signage. The mile posts are being prepared for the planting season. 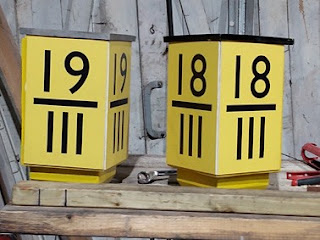 Thanks to all who have lent a hand and to Andy G for the pictures.

Plans For The Reopening Day

Friday 1st of April 2022 is the day that CHR will reopen the line between Oswestry and Weston.

The official opening of Weston station will be performed by Helen Morgan MP and the special train will leave at 2pm being given the right away by Vince Hunt of Shropshire County Council.

There is still plenty to do before we can run trains, not least the retubing of the Barclay's boiler.

Keep an eye out for more news of the reopening.

The Chips Are Down

The New Year has seen a further push to get ready for April, when it's planned to open the extension to Weston.

There are many jobs that need to be completed and the volunteers are working flat out in multiple locations.  Andy G has been busy with his camera catching up with progress.

We start at Black Meadow Crossing where the fencing and cattle grids need to be finalised. In the first picture the northern grids are in place and the fencing is in progress. 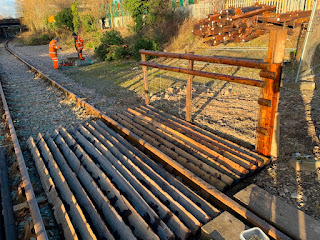 The view looking north at the end of the day shows that the work is almost complete. 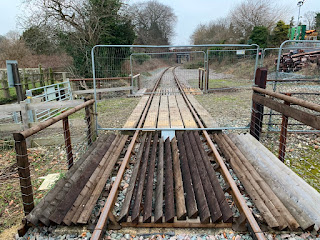 Down at Weston it's time to work on the platform surface and large quantities of chippings have been laid and rolled.
Starting from the north of the platform we can see the view of the bay platform and refreshment coach. 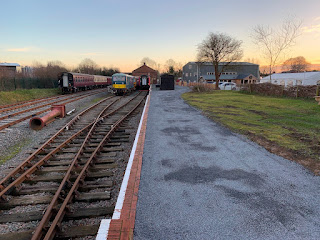 The area beside the refreshment coach, which will be known as Snacks On The Tracks, is shown in the next photo. 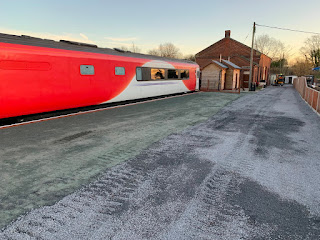 The access way to the coach is looking good. 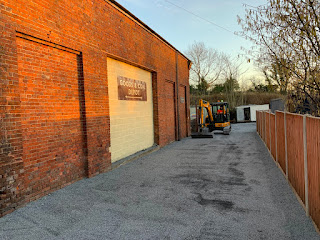 On the side facing the road further chippings are being spread and rolled. 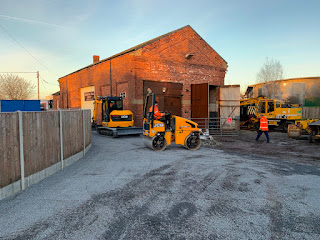 Just a few more loads and the entrance will be complete. 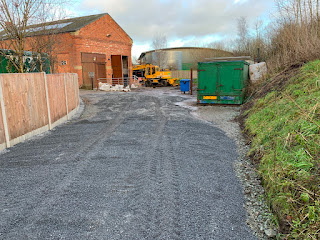 Work is ongoing on the fence next to the brewery. 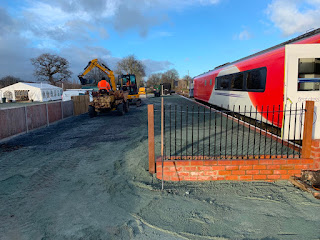 The piles of chips are gradually being reduced as the platform surface grows. 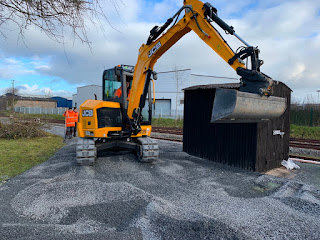 The stones need to be layered and rolled. 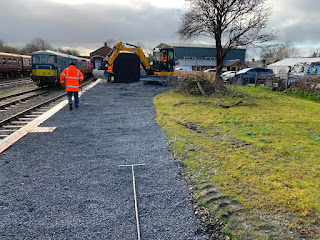 Elsewhere work continues on the details that will add to the atmosphere at the stations. Steve and Phil show their latest projects. 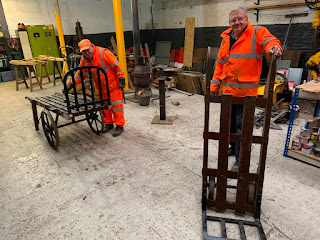 Many thanks to Andy G for the pictures.
Until next time.
Posted by Adrian P at 12:38 No comments:

Reopening News and Keeping Up To Date

The official opening of the extension to Weston is planned for the end of March 2022 with public services starting from Easter.

We look forward to welcoming you onboard one of our services.

As the major jobs have been completed on the Extension the blog will slow down for a while.

Please keep up to date with the latest developments on the CHR by signing up to the newsletter or visiting us on Facebook.

To sign up for the Newsletter click on the link at the top of the page for the CHR homepage.

After three years of work by the team at Oswestry the Mk 1 Suburban Coach was rolled out to join the passenger carrying fleet.  This restoration has included repairs to the bodywork and internal woodwork.

The following views of the coach are courtesy of CHR Facebook. 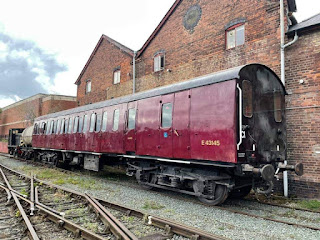 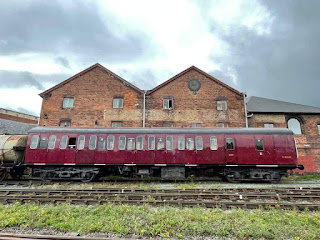 Well done to all of the volunteers who have put hundreds of hours into the restoration of this coach.